My husband tried to install some smart switches to be able to control our lights whether we are home or not. Unfortunately, it was wired in such a way as to make that impossible, but he couldn’t get it back to the original wiring either. I got a referral from a friend about Hannay Electric and sent a text. Anyone who owns a house knows how hard it is to get a contractor willing to work on a small job, but that wasn’t a factor with Hannay was Electrical. He explained to me over the phone that he has run into this in other houses built at the same time as ours (2010) and some of the switches with multiple controls simply can’t be wired for smart switches. I was pleasantly surprised when Hannay was available to come out the next day (I texted on a Sunday) and he was here right on schedule. He was very informative and helpful. His fee was reasonable (actually a little less than I expected) and he finished the job quickly and efficiently, while still finding the time to chat for a few minutes. Without a doubt I will use Hannay Electric again if the need arises. He was also good for my husband’s ego (as he is quite good at basic electrical work), reminding me to tell my husband no one could have made the switch do what we wanted it to do. 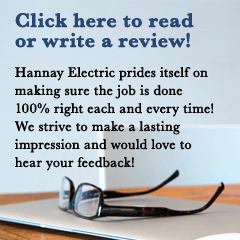